On this page you’ll find a gallery of sample performances that reflect Kyle Haugen’s experience as a conductor, composer, organist, and tenor.

Conductor/Composer (alphabetical by title of piece)

Grant Us Thy Peace

Kyle Haugen conducts the Northwest Reformation 500 Festival Choir in Felix Mendelssohn Bartholdy’s “Grant Us Thy Peace” for choir and piano (Neil A. Kjos Music Co.) on October 29, 2017. The event commemorated the 500th anniversary of Martin Luther’s 95 Theses.  The Festival Choir was a non-auditioned chorus of more than 200 singers from across the Puget Sound region. Two rehearsals were held prior to the event.

Lost in the Night

Anton Armstrong conducts the St. Olaf Choir in Kyle Haugen’s arrangement of the Finnish Advent hymn “Lost in the Night” for SAB voices and piano (Augsburg Fortress) in the Twin Cities Public Television production of the 2001 St. Olaf College Christmas Festival, Love Divine, Illumine Our Darkness. The program was broadcast annually on PBS television stations throughout the United States for four years.

When I Survey the Wondrous Cross

Kyle Haugen conducts the Northwest Reformation 500 Festival Choir in Gilbert Martin’s arrangement of the hymn “When I Survey the Wondrous Cross” for choir and organ (Theodore Presser Co.) on October 29, 2017. The event commemorated the 500th anniversary of Martin Luther’s 95 Theses.

Kyle Haugen’s original music to Jaroslav Vajda’s text “Where Shepherds Lately Knelt” is performed by a studio choir (SATB divisi and piano) upon its publication by Augsburg Fortress in 2018 .

A PDF of the program pieces, including a comparison the original German and a new composite translation of the hymn “If You But Trust in God to Guide You” prepared by Kyle for the recital may be found here.

To skip ahead, click the “play” button (triangle) and slide across the timeline (total: 35:52): 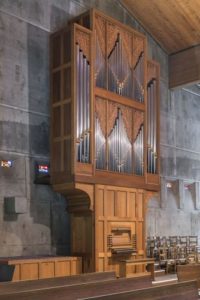 Kyle Haugen, tenor, performs “Bring Him Home” within a medley of selections from Les Miserables for a pops choral concert performed by Northwest Repertory Singers. Recorded live in performance May 2013.